The Nissan GT-R (X) 2050 concept is quite obviously a flight into the future. Designed by Nissan intern Jaeburn (JB) Choi, it is an autonomous supercar designed for a single occupant who puts on a dockable body suit, climbs in, and lies face down and face first. This contortionist exercise is no mere sketch, either. David Woodhouse, vice president of Nissan Design America, was intrigued enough by Choi’s

vision that he approved a full-scale model to be built.

Nissan GT-R (X) Concept: All About The Size And Shape

The concept is almost 10 feet long but is only about 2 feet high. It only has room for one person—who, technically, is not the driver since it is an autonomous vehicle. Would you ride in something like this, in that face-first, face-down position? We’ll leave that question in your head, but also point out that most autonomous vehicle concepts these days resemble shrunken subway cars with plain upright benches. So this is different.

Nissan’s concept also is essentially a wearable machine: the single occupant not only lies prone with arms and legs splayed so the body forms an X, but the “driver” (occupant?) wears a form-fitting suit and helmet—picture the skeleton competitors at the Winter Olympics.

And the driver is essentially “docked” in the car: the helmet inserts into a slot to access the front vision camera with virtual-reality vision—there is a small window in the car but visibility is limited. Never mind that the occupant becomes a sort of iPhone charging cable in the process.

“Exo-skeletons today make people stronger by wearing mechanical structures,” says Choi. “I tried to fit the size of a person’s body as much as I could, as if I were wearing a car. I wanted to create a new form of machine that is not a vehicle to ride, it is the space where machine and the human become one.”

Woodhouse describes it as similar to a four-wheel superbike laid on its side.

The wheels are designed to allow the vehicle to turn 360 degrees. The tires have an outer diameter of 21 inches and inner wheel circle of 15 inches. An active wing adds downforce when extended—it folds so the drive can get in and out which is done by lifting the top of the car.

The GT-R (X) supercar would be an electric vehicle and Choi visualizes a beating heart energy source, like the one in Marvel’s Iron Man. He envisions a lightweight vehicle made of a flexible material.

During a time of isolation and working from home, the X-shaped supercar evoked excitement, drew on some current Nissan GT-R design cues, and also dovetails with some of the future technology Nissan is working on, known as B2V for Brain-to-Vehicle, said Woodhouse in explaining why this project made it to the milling machine for a scale model.

The GT-R-inspired car would be an alternative for enthusiasts in a future of otherwise identical squarish pods providing transportation. As for the GT-R cues, Choi points to the taillights, red striped accents and overall body volumes.

Woodhouse liked the idea of a supercar driven by brain-to-vehicle integration. “His (Choi’s) thesis was all about demonstrating the emotional connection technology can create, and the benefit that it can deliver for customers,” says Woodhouse.

Don’t get spooked, but a “brain-to-core transmitter” in the vehicle helps the brain activate the car. Choi’s idea was to connect the human brain to the car’s brain, the computer. The car design imitates the human body to protect the brain, he says.

In Choi’s vision, all cars decades from now are fully autonomous. In 2050 he envisions a world where computers have far better driving skills than humans and it may, in fact, be illegal for people to actually drive themselves. But they can feel as one with the car and give it directions and the car will determine if they are smart and safe to do.

Who Is This Intern?

Choi, born in Seoul, South Korea, is a graduate of the ArtCenter College of Design in Pasadena, CA. His thesis was to create an autonomous GT-R for 2050, when machines are a physical extension of the driver.

As part of his internship at Nissan Design America, (mostly a remote exercise, done from home because of the pandemic) Choi brought his thesis to life as the Nissan GT-R (X) 2050 concept. He never imagined Nissan would let him create a full-size model.

Choi’s internship has ended, but he will soon be a Nissan employee, Woodhouse says.

This Holliday season has confirmed the dominance of online shopping. All those smiling boxes couldn’t make it to you without thousands of delivery vans, so the next generation eSprinter has been announced by Mercedes-Benz. Their latest press release hints at the details of their new “Electric Versatility Program”. Starting with an investment of 350 million euro ($422,822,750), the Sprinter plants in South Carolina and abroad will be re-tooled for a high-voltage future.

Every aspect of a Pagani is designed to take your breath away. From matched luggage to machined titanium, here is a rare opportunity to see the 2017 Pagani Huayra Roadster “Rosso Dubai” in action. A change in the seasons prompted our friends at Pagani of Greenwich to excercise this roadster before hibernation. 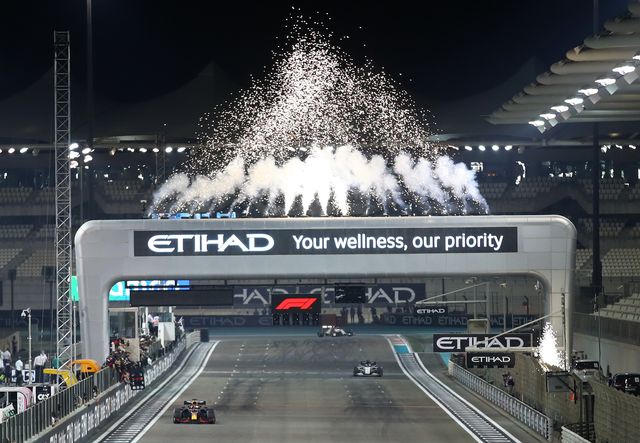 The dominant pace of the Mercedes W11 may have meant that Formula 1’s 2020 season was never really in question, but, despite the obvious conclusion, it was still one of the more exciting seasons in recent history. Some races had shocking winners, others had memorable drives through the field, and last weekend’s event at Bahrain found a way to pack all of that into a single race. These will be the things we remember about the year in racing.

Lamborghini and Ducati to Remain in VW Group

With a need to slash costs and invest heavily in electrification, the Volkswagen Group considered spinning off some of its less essential luxury brands, Lamborghini, Ducati, and Bugatti. Early today, though, the Group announced that Lamborghini and Ducati are sticking around, though no announcement was made regarding Bugatti. Additionally, VW confirmed that Bentley would be placed under Audi control, as the two brands are set to share lots of electric-car technology in the coming years. All of this news came following a VW Group board meeting, where, as Automotive News Europe reports, the board backed CEO Herbert Diess after a power struggle and made concessions to Germany’s powerful labor unions.

With its 6-litre Mercedes V12, Ruf-tuned gearbox, Porsche suspension, Shinkansen windshield wiper and model name chosen in tribute to Enzo Ferrari, the Isdera Commendatore 112i was the all-star 1990s hypercar you never heard of. Now the long-tailed unicorn is coming up for auction with RM Sotheby’s.

From the Nürburgring to Sebring, WEC to IMSA, the hunchbacked, rear-engined 911 GT3 Cup is an extremely familiar sight at racetracks around the globe. Porsche says the GT3 Cup is the world’s best-selling race car, and the company just pulled the silk off of its newest incarnation: the seventh-generation, 992-based 911 GT3 Cup. Now, this best-seller is wider, stronger, and faster than ever before.

Porsche says the new car, derived from the street-legal 911, is up to one percent faster per lap than 991.2-based GT3 Cup; around which track isn’t clear, so we think the automaker is referring to a general projected average here. “So what?” you might be thinking. While just one solitary percent of one solitary lap doesn’t sound that incredible, when added up over the course of dozens (if not hundreds) of laps, it makes a huge difference.

The day is here. The Ford Mustang that isn’t a Mustang—the Mach-E electric crossover—is charged up and ready to go. If you’ve been living under a rock for the past year or so, Ford has created an all-electric people hauler chock-full of Mustang design cues and the performance numbers are, well, actually better than all but the fastest of Blue Oval ponycars. But will it convert the faithful?

It might depend on the trim, of which there are five: Select, Premium, First Edition, California Route 1, and GT. GT has an option above it called GT Performance Edition that is the peak of Mach-E performance. Furthermore, there will be two battery options, standard range and extended range. And in addition to that, you can choose between rear- or all-wheel drive.